Below you will find some games that we have made up or altered throughout the years. These are some of my students favorite games!
BACK TO MAIN PAGE 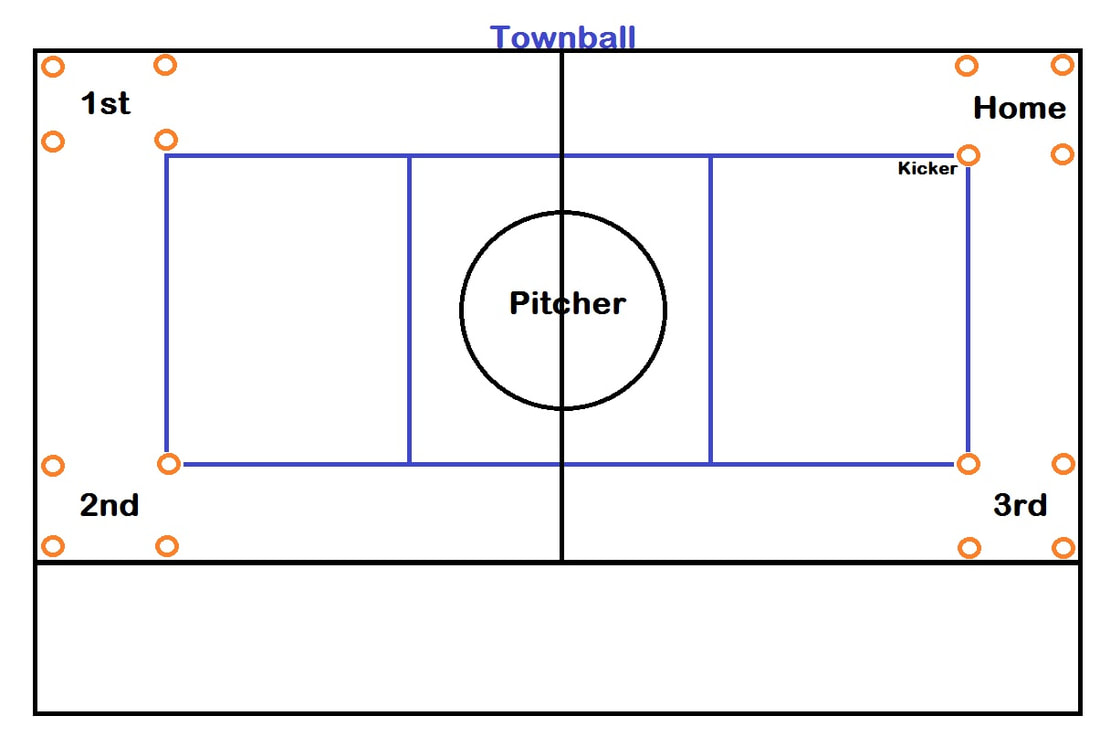 How to Play Townball:
The kicking team starts on home base.  The kicking team will have one kicker for each half inning. The fielding team will spread out all over the field.  The fielding team will have one pitcher for each half inning.  The pitcher will stand in the center of the field.  The bases are designated with four cones.  Each half inning requires three outs, to end. The goal of the game is to get as many runners from "home" around the bases and back to "home".  Each time a runner completes this process, they will score a run for their team.  The team with the most runs after equal batting opportunities, wins.

How to get outs:
Other Rules: 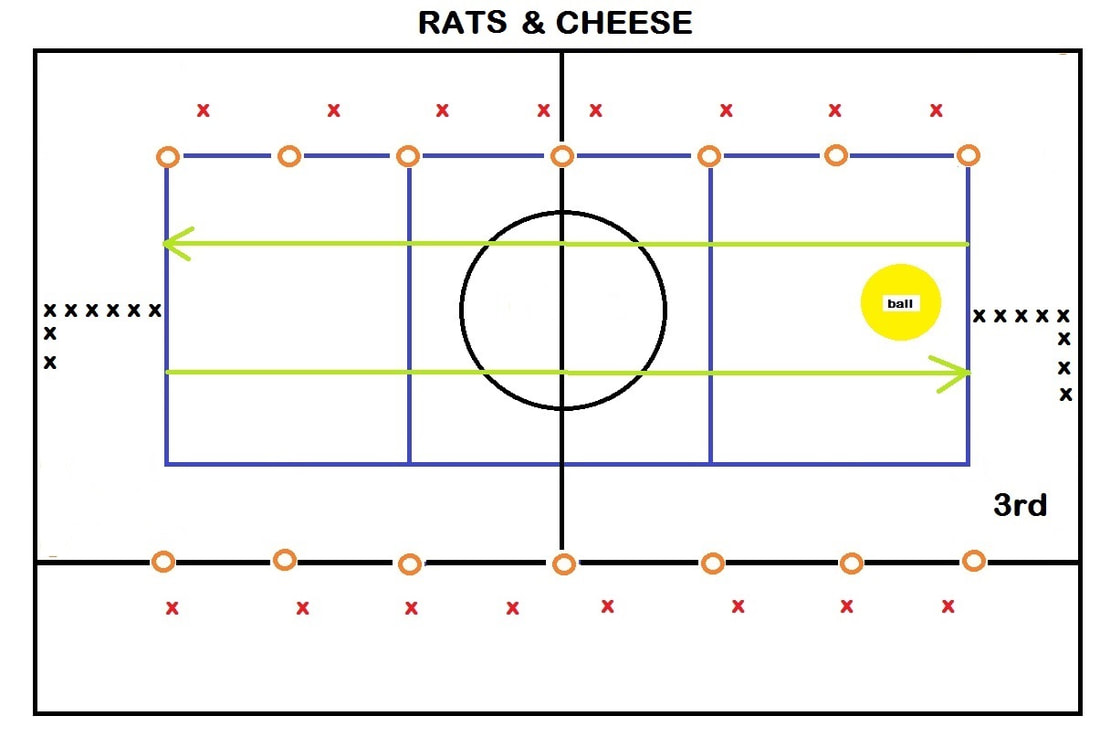 How To Play Rats and Cheese:
Start with two equal teams, "Rats" and "Cats".  The Rats are represented by the black "x" and the cats by the red "x".  The cats will have a certain number of gator skin balls (your own judgement).  I usually start out with three balls and add from there.  The goal of the game is to get the "ball" from one end of the volleyball court to the other.  If a player or players successfully does this they will earn a point for their team.  if a player is touched with a gator ball while attempting this they are out.  When players are out they will go to a designated area and complete a physical task, i.e. ten push ups, twenty sit ups, fifty jumping jack, etc.  When a rat gets out, the next rat must come from the same side as the rat that got out.  If there are not rats on that side, a rat from the other side must run around the playing area to the opposite side.  If a rat catches the ball in the air they may use it to deflect balls for one single point and then they must drop it.  Balls that are retrieved in the playing area by a cat, must be tossed to a teammate behind the coned areas.  The cat that retrieved the ball can not throw the ball at the runner.  In addition, the cats must be behind the line that the cones are on when targeting a rat.  If a cat steps over the line and strikes a rat, that rat would get a free run.  No head shots will count unless the runner is ducking or jumping.  When all the rats are out the two teams will switch roles.  An inning is complete when both teams have been cats and rats. 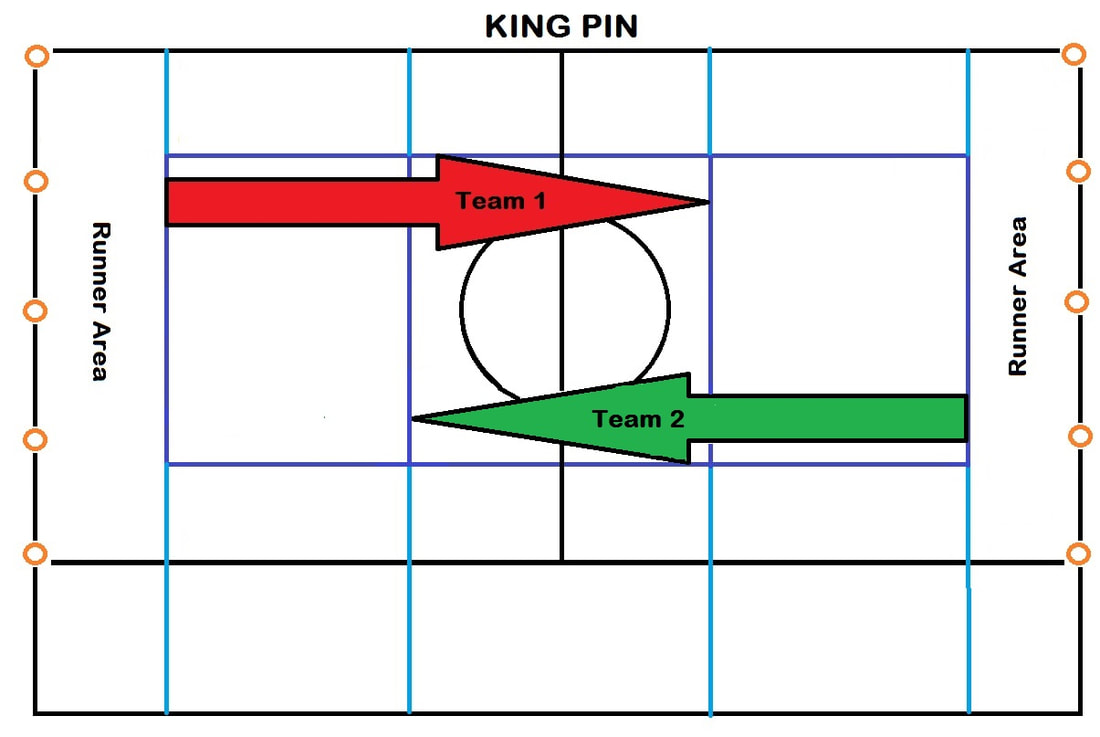 Example of King Pin set up below 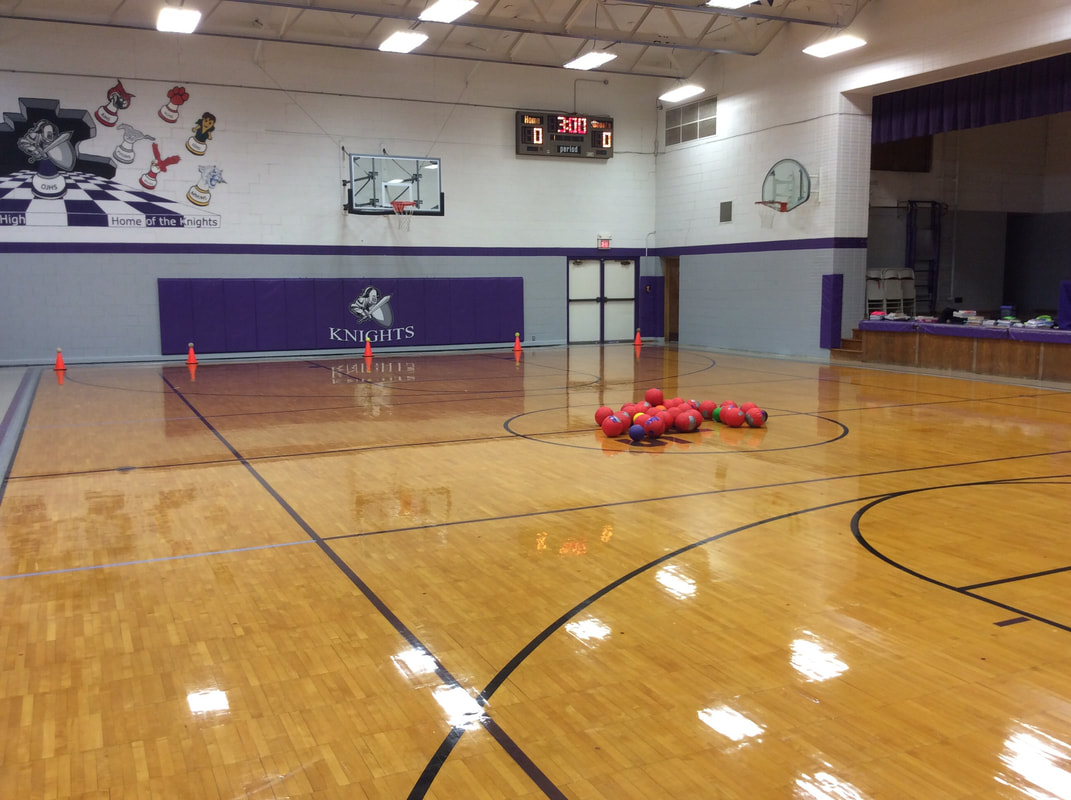 How To Play King Pin:
Five 12" cones are lined up on each end of the basketball court.  On top of each cone I place a 12" ragball but any ball can work as long as it balances on top of the cone.   Team one can utilize the area from the back volleyball line to the opposite 10ft volleyball line, as shown by the red arrow. Team two can utilized the opposing area as shown by the green arrow. In the diagram, you will see blue lines.  These blue lines are extensions of the existing lines (I use 1" blue painters tape)  The runner area is designated for one person on each team.  The runner's job is to get the dodgeballs out of their area back to their teammates to throw and place the rag balls under the cones as they get knocked off.  The runner is NOT to block any dodgeballs from striking the cones. The other players are attempting to throw dodgeballs at the cones or the opposing teams players.  Dodgeball rules apply.  If a player gets "out", they will leave the playing area and perform a designated exercise. (5 push ups, 5 sit ups, 10 jumping jacks, etc.)  The team that successfully knocks all the ragballs off the cones opposite them, wins.

Modifications:
This can also be played only kicking the ball. 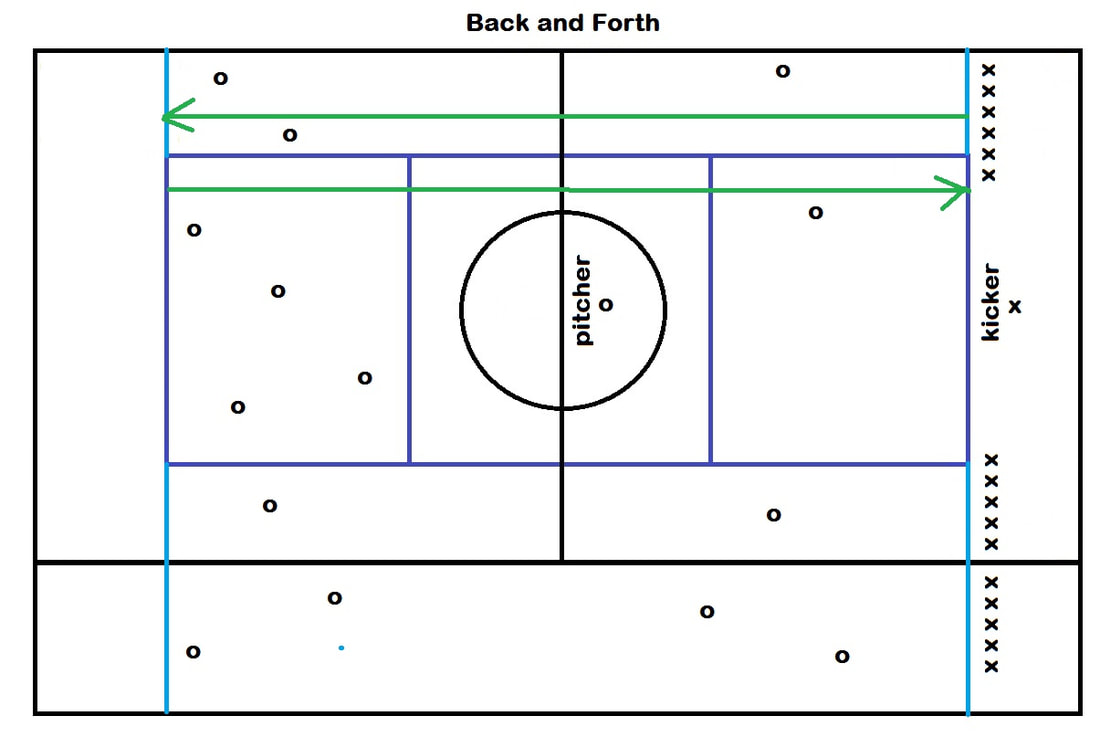 How to Play Back and Forth: 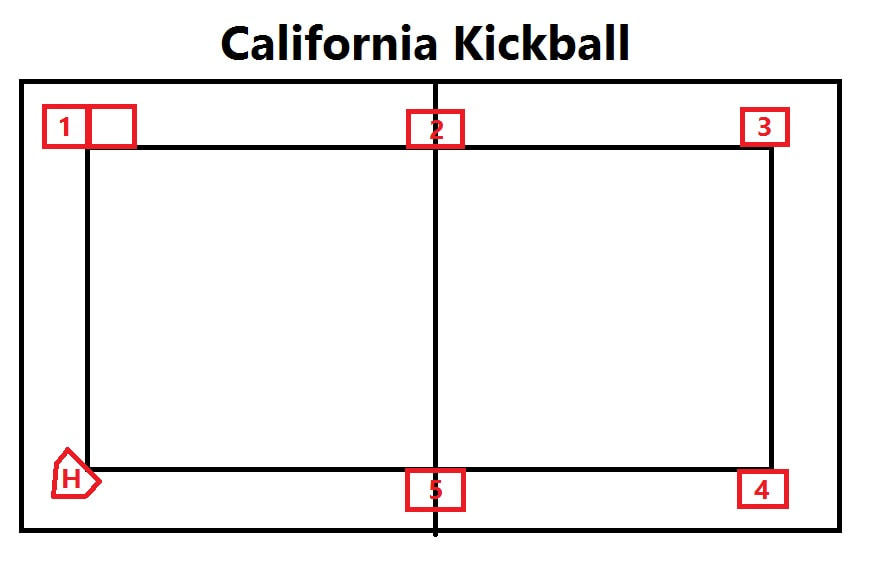 How to Play California Kickball:
This is just like traditional kickball except:

Modifications:
Armball
​Substitute a volleyball for the dodgeball.  The pitcher will underhand toss the volleyball so that it bounces once.  Batters will use a closed fist to "hit" the ball into play.  In Armball, we play baseball rules with the six bases. So, force outs, tags and catches are used to make the outs. 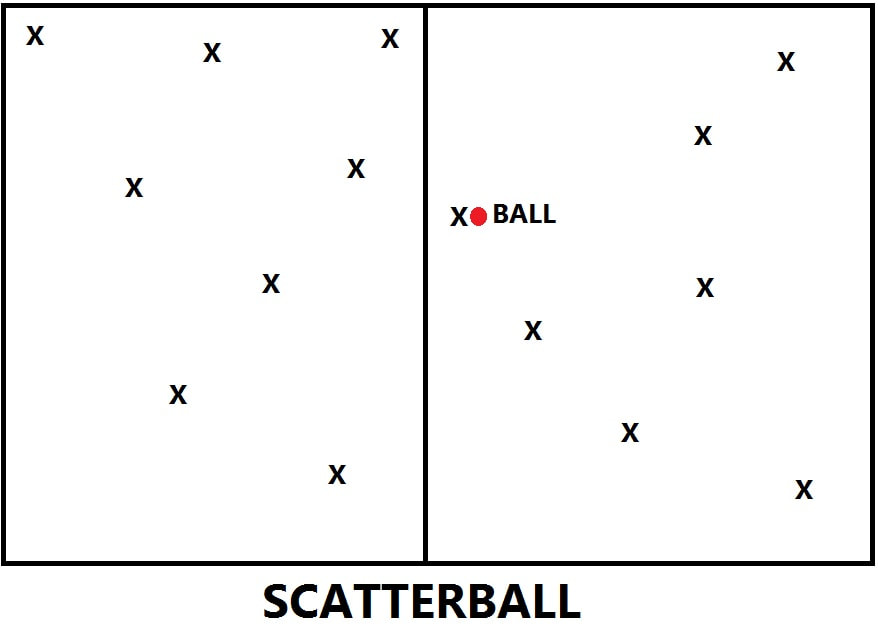 Scatterball is basically one person dodgeball.  To start the game, I chose a student and flip the ball to them.  The person with the ball can not run with the ball but they may crow hop or pivot.  Once the ball is thrown, anyone can pick it up.  The last person standing is the winner.  As the players dwindle, I make constraints on the boundaries.  When a player is out they will vacate the playing area.  One modification is to have players that are out sit where they got out and if they get the ball and get someone that is still standing they may stand up.  Another way to allow players to re-enter is if they can tag a player that is still in.
Physical Education is the BEST Education!
Powered by